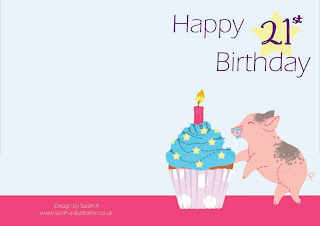 Birthday card I designed for my sister.
Posted by Sarah A at Saturday, February 23, 2013 No comments: 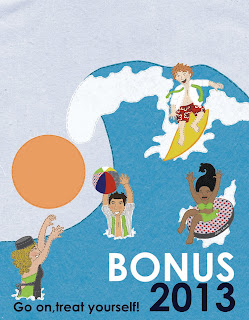 So every year the Gazette runs a competition for partners to design  the new John Lewis and Waitrose Partnership Bonus Poster, which would be posted in all the branches to let  partners know that the bonus was coming up and what the percentage would be.  The winning design would be displayed in all Waitrose and John Lewis branches,and be printed on the cover of the Gazette magazine and the winner would also receive an Ipad3.
The brief was very open, however the design had to reflect the Partnership as a whole and be eye catching.
This was my entry. entry. I didn't win sadly but it was fun to do and I love the fact that the poster would be designed by an actual Waitrose/John Lewis Partner. I'll definitely try again next year!
Posted by Sarah A at Saturday, February 23, 2013 No comments:

"It's not always easy, Being Human" 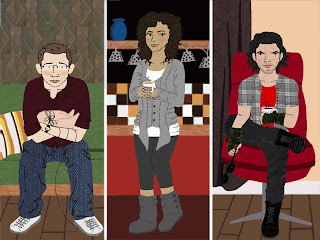 So I've been re-watching the amazing-ness that is Being Human again and decided to do some fan art.
Series 1 and 2 are my favourites so I wanted to used imagery/designs from that time. I particularly like the house, with it's bright colours, weird wall papers, wooden floors and  mismatched furniture, so I have set each character in a different part of it.
Annie is in the kitchen because (as any fans of the show know) she like to make tea, lots of it. Mitchell seems to sit in the red chair a lot when he's brooding/thinking and George I put on the green couch as it has that cool patterned wall paper behind it. I have also placed some character references in there too.

It's  rather weird timing that I decided to watch this show again, as just the other day I found out that this current series, series 5 is going to be the last series of the show! Which makes me sad but at the same time I'd rather it go out in style rather than get dragged out.

Sarah A
Illustrator who likes textures, patterns,stitch/embroidery and colours. Please feel free to contact me for commissions or freelance work at sarsaustin@hotmail.com or direct message me on twitter